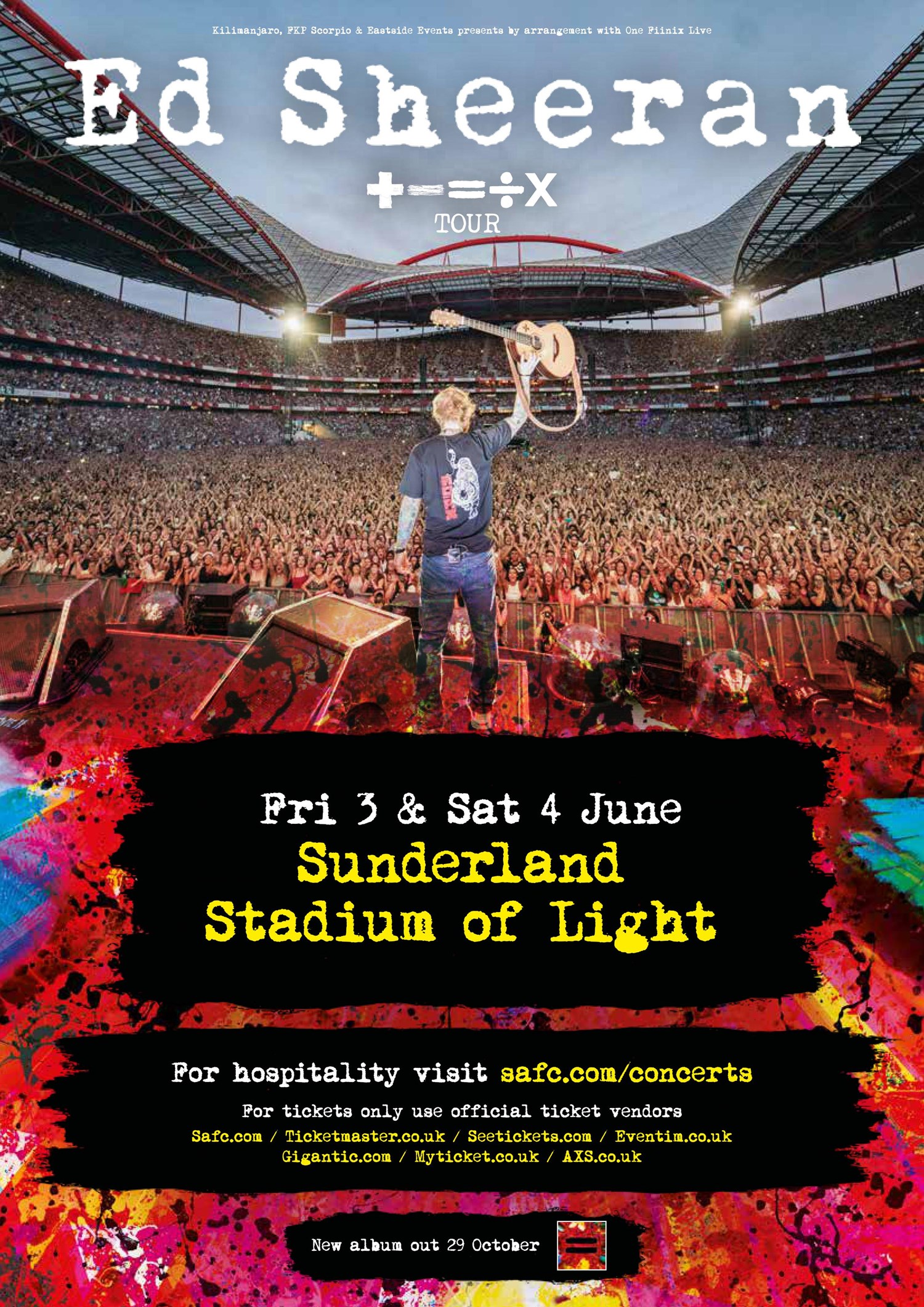 Ed Sheeran has announced his ‘+ - = ÷ x Tour’ (pronounced ‘The Mathematics Tour’), including two dates at the City of Sunderland’s Stadium of Light in June 2022!

Kicking off in April next year, the tour will see Ed play shows across the UK, Ireland, Central Europe and Scandinavia, with his North East double taking place on Friday 3 and Saturday 4 July – a Bank Holiday weekend to celebrate the Queen’s Platinum Jubilee.

General sale for all territories will commence on Saturday 25 September and tickets will be available to purchase at www.edsheeran.com.

A range of hospitality packages are also available for the Stadium of Light dates and you can register your interest by clicking here.

The ‘+ - = ÷ x Tour’ will see Ed return to stadiums for the first time since his record-breaking ‘Divide Tour’, which officially became the most-attended and highest-grossing tour ever by the time of its completion.

On next years’ dates, fans will get to see Ed perform an array of tracks off his upcoming album, ‘=’, live for the first time, and they will also experience a new production set-up with Ed’s staging surrounded by the crowd in each stadium.

Ed’s highly anticipated new album will be released on 29 October through Asylum/Atlantic.

Later today, Sheeran is set to replace himself at No.1 in the UK’s Official Singles Chart following the release of his new single – ‘Shivers’ – a track that Ed performed for the first time at last weekends’ MTV VMA’s.

It follows his colossal comeback track, ‘Bad Habits’, that has so far spent 11 consecutive weeks atop the same chart.

Please note, there is no pre-sale for this tour.

Once again, Ed and his team have a strict stance against anyone using unofficial secondary ticketing sites in order to try and stop fans being exploited when trying to buy tickets for his shows.

The shows on this tour will use specially developed mobile digital ticketing technology which have safeguards in place to ensure genuine fans are buying genuine tickets, and to stop unofficial secondary ticketing sites, and unofficial ticket sellers, from being able to resell tickets at inflated prices and rip off fans.

In order to make buying legitimate tickets easier on the day, fans are encouraged to sign up for an account with an official ticket vendor in advance of the on sale.

Fans who become unable to go to the shows will be able to sell their tickets to other fans at the price they paid + a booking fee through the official fan to fan face value resale platform at the place they purchased the tickets.

The promoters urge all customers to only use the official ticket sites listed at Edsheeran.com and are reminded that Viagogo is not an official ticket vendor for this tour.

As per previous Ed Sheeran tours, the promoters will be monitoring the sales transactions in conjunction with the National Trading Standards Cyber Crime team, to identify purchases which are in contravention of the terms and conditions for the sale of the Ed Sheeran tickets.

All ticket purchases that contravene these terms and conditions will be subject to possible cancellation.

For a list of FAQ’s on this please visit www.edsheeran.com.